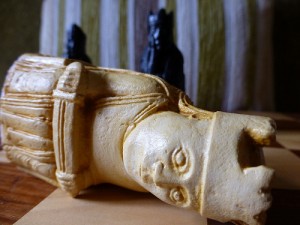 (by Theo Dombrowski, OSC TOK blog, May 15, 2015) “Those who cannot learn from history are doomed to repeat it.” Ho hum? Heard this before? In the first place, this famous “quotation” is apparently a distortion–albeit a slight distortion–from George Santayana’s actual assertion, “Those who cannot remember the past are condemned to repeat it. ” More to the point, the statement raises important questions about the nature of historical knowledge. In fact, it doesn’t really matter what a particular philosopher actually said (or even whether, as is often claimed, that it was Edmund Burke who said it first). What matters is that the widely quoted version has captured the imagination of those who accept the vital importance of historical knowledge, not as an end in itself, but for the way it can translate into understanding–and acting on–current social and political forces.

But this isn’t enough.   Of what is this knowledge supposed to consist? Surely not merely the sequence of incidents! The assertion makes most sense if we understand it to refer to causes and effects. As historian Charles Freeman says, “the excitement of history lies in trying to offer explanations for developments.” (TOK Course Companion, p. 283) In this centennial of the start of World War I, the widespread scrutiny of the war’s causes thus becomes not just discussion of Kaiser Wilhelm’s personality, Serbian resentment of Austrian domination and so on, but more generalized principles of what kind of action leads to what kind of consequence. *

A new book casts a provocative light on the nature of historical knowledge–and suggests all sorts of interesting exercises and discussions for a Theory of Knowledge class. In Altered Pasts: Counterfactuals in History, Richard J. Evans examines the phenomenon of so-called “counterfactual histories”. For those who might be a little hazy on this phenomenon, a counterfactual history is a kind of “what if” speculation on how big chunks of history would have been completely different if a single key event or decision had been different from what it actually was.

At first blush, this kind of speculation might seem like the kind of hypothesis we expect of most academic disciplines. The “hard sciences”, of course, lose much of their purpose if they stop with description of what has happened or is happening. On the contrary, the physical universe can be understood fully only as complex pattern of “if/then” links. (The same is true even for biology, with its complex web or nature/nurture causalities). But history?

In the first place, much is to be gained by simply knowing, descriptively, what has, in fact, happened. In this case, the chief knowledge questions involve knowledge sources, perspectives, and ways of knowing discussed in the Course Companion pp. 276-281.

Second, though, when we try to understand cause and effect, though crucial to the most thoughtful approach to history, complexity can explode in our faces. We might think that by asking, “What if?” we gain deeper understanding intowhy. In an article published the month before the release of his book, (and using the particular example of the first world war).

…this kind of fantasising is now all the rage, and threatens to overwhelm our perceptions of what really happened in the past, pushing aside our attempts to explain it in favour of a futile and misguided attempt to decide whether the decisions taken in August 1914 were right or wrong. For that way, of course, leads not to historical understanding but to all kinds of wishful thinking, every hypothesis political in motivation….

This isn’t the only charge that Evans brings against this kind of hunt for cause and effect through speculation:

“Counterfactuals”, as such “what-if” speculations are generally termed by the aficionados, are often claimed to open up the past by demonstrating the myriad possibilities, thus freeing history from the straitjacket of determinism and restoring agency to the people. But in fact they imprison the past in an even tighter web: one tiny change in the timeline – Archduke Franz Ferdinand escapes assassination in Sarajevo, the British cabinet decides not to enter the war – leads inevitably to a whole series of much larger changes, sometimes stretching over decades almost up to the present day.

Although he doesn’t say so directly, he seems to be suggesting that counterfactual histories are a kind of butterfly effect/chaos theory in reverse. Remove that fluttering butterfly with a snop of a hungry bird’s beak, and what would happen to that hurricane on the other side of the world? “Calm as a millpond”, would apparently be the answer for a counterfactual historian.

More to the point, Evans argues that counterfactual histories ignore the importance of other random events in history: “…this ignores, of course, an infinite number of chances that might have deflected the predicted course of events along the way –”. If we apply Evans’ point to our hapless butterfly, then it seems that even if it does become a tasty dish for a starling before it flutters its hurricane-inducing wings, there are other butterflies to take its place–or, even more appropriately, other sources of initially tiny air turbulence.

In addition, as Evans points out, historians actually attempt to look at a complex web of causes and effects: “every historian tries to balance out the elements of chance on the one hand, and larger historical forces (economic, cultural, social, international) on the other.”

A third objection to counterfactual history is that it seems to be shackled to two narrow and outmoded kinds of historical thought. First is the “great man” view of history, long defunct, and second is the “kings-and-battles” summation of the past. Even given Evans’ objections, we might guess it is more in thepractice of counterfactual history than in its essence that these previous two limitations are evident.

Arguably, the same is true of his fourth objection, that it is mostly churned out in the form of “reactionary fantasy”–where ‘what if’ counterfactual history is really little more than ‘if only’”. Or, more put more harshly, “Counterfactuals are the byproduct of a paranoid nostalgia specific to the right, where “greatness” is forever being sabotaged by leftists, liberals or whoever.”

Using counterfactual history to illuminate history as an AOK

A discussion in TOK class could well involve not only these four objections, but also some others, and ones that beautifully combine WOKs and particular claims of history as an AOK. After all, as sharp students will point out, “What if” is a question absolutely fundamental to the “hard sciences” and, perhaps to a lesser extent, the human sciences. Forming a hypothesis, they will point out, is what the sciences are all about.

What they are also all about, though, of course, is testing the hypotheses. And the very fact that historical hypotheses are largely untestable is the main reason history is separated from the human sciences as an AOK. That is, they are not testable by replicating the events (as closely as is possible with variable human beings) and making further observations!

And yet – in history, interpretation of the past is still constrained by the evidence. We cannot re-run a specific battle, a particular plague, or the development of a farming technology in order to take better notes. However, the evidence that has come down to us in documents or artifacts provides the basis for any interpretation of the past; it must not be “imagined away”.

But what might substitute for testing a hypothesis in a counterfactual history? When the real events of the past are indeed “imagined away” – with the substitution of events as they did not happen – then the hypothesis conflicts with the evidence. It is false. When a sequence of counterfactual consequences then follows as a result of a false account of the past, then we have left the realm of historical knowledge.

Nevertheless, counterfactual histories may usefully illuminate the way that history is constructed, and also illuminate the nature of specific historical events.

Counterfactual histories as a popular trend

Why–other than to push ideologies–are such counterfactual histories suddenly so popular? Evans speculates that much strikes to the heart of fundamental questions of shared knowledge:

Perhaps it’s because we’re living in a postmodern age where the idea of progress has largely disappeared, to be replaced by uncertainty and doubt, and where linear notions of time have become blurred; or because truth and fiction no longer seem such polar opposites as they once did; or because historians now have more licence to be subjective than they used to.

In terms of TOK what will probably stand out most are two issues that raise knowledge questions:

In this anniversary year of the First World War, students and teachers alike are likely to come across lots of shows, articles, re-enactments, and speculations. In fact, given the current popularity of all counterfactuals, they are likely to come across many other areas of history making a “What if” claim on their credulity. Whether in the context of class–history class or Theory of Knowledge class–the fortunate I.B. student will be well equipped to react thoughtfully and analytically to such claims. What if?

One response to “TOK and counter-factual history”