“Don’t Even Think About It: Why Our Brains Are Wired to Ignore Climate Change” 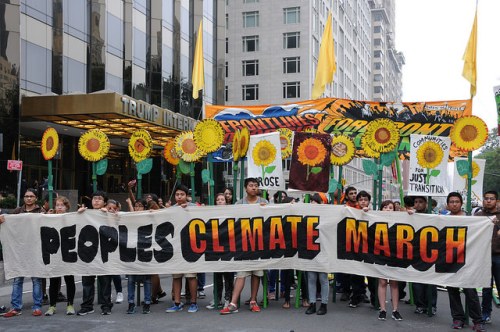 (by Theo Dombrowski, from OSC TOK blog September 23, 2014) On September 21, more than half a million people in 166 countries (approximately 400, 000 in the New York flagship march alone) marched to demand that world leaders act to tackle climate change. Their demand was directed in large part to the leaders converging today for an emergency UN Climate Summit. Will their huge numbers have any effect on the attitudes–or beliefs–of those who have not already accepted the conclusions of 97% of the world’s climate scientists?

According to the author of a recent book, the answer just might be yes–but not, perhaps, for reasons that most protestors might expect. In Don’t Even Think About It: Why Our Brains Are Wired to Ignore Climate Change, George Marshall summarizes, analyzes, and illustrates some fundamental questions of the way that humans gain shared knowledge–or, equally, refuse to accept overwhelming evidence.

“More than any other issue it exposes the deepest workings of our minds.”

The dog-eared historic example most used to illustrate this characteristic of human close-mindedness, is, of course, Galileo. Galileo’s case, however, is, let’s face it, just a little old. More to the point, it is usually explained, comparatively simplistically, in terms of faith/ideology, backed by power, trumping scientific evidence. Alas for the spread of shared knowledge…  The limitations, and the reasons for those limitations, on the sharing of knowledge might be relatively unimportant in some cases: the future of humankind might not much depend on our all knowing the six flavours of quarks or who wrote Shakespeare’s plays.

Marshall’s example, climate change, though, is both more immediately pressing and more dismayingly complex. If what Marshall says is true, many of the biases, heuristics, fast thinking patterns of intuition and so on considered by many ToK teachers (See 2013 IB Theory of Knowledge Course Companion, chapter on Intuition) make a virtual impenetrable barrier to increasing our shared knowledge of climate change beyond present levels. In fact, Marshall’s most underlying argument (remember the title of his book?) is that our non-rational selves, our ‘hard wiring” is just about–but not quite–insuperable. Most of us alert our students to pitfalls in our ability to process evidence because we hope that understanding these pitfalls can lead to bypassing or minimizing them in ourselves–as well as recognizing them in others. While such knowledge of our mind’s pitfalls may be helpful, in the case of climate science, Marshall says such knowledge falls far short of being sufficient.

In fact, Marshall claims we can hardly go deeper into understanding how humans struggle to process information and develop convictions than through examining their relation to climate change: “More than any other issue it exposes the deepest workings of our minds.” The deepest workings of our minds? This is an impressive claim and one worth at least considering. As he writes in his introduction to the book, entitled simply “Questions”, ” How is it possible, when presented with overwhelming evidence, even the evidence of our own eyes, that we can deliberately ignore something–while being entirely aware that this is what we are doing?” (italics mine)

Where to Find Marshall’s arguments

Marshall’s whole book is well worth getting as resource for TOK teachers and, of course, everyone else. Without buying the whole book, however, three online resources can provide the most central of his arguments and form the basis of many provocative quotations for discussion.

First is an interview conducted a few months before the book was published.

Second is the “look inside” link to the book’s online sales site. Here you can see the illuminating and extensive Table of Contents and well as read the Introduction, called “Questions”.

For those who want a quick-and-easy summary of many of the book’s points, read a review by Matthew Hutson, himself an author of a good TOK resource The 7 Laws of Magical Thinking: How Irrational Beliefs Keep Us Happy, Healthy, and Sane.

So what exactly does Marshall reveal about our “hard wiring” that makes it so difficult for so many of us to embrace the scary assertions of climate science?

A few of his claims might prove interesting fodder for class discussion–particularly if some insist they themselves don’t fall victim to them. Here is a sampler:

1. We are only likely to accept as “convictions” assertions about climate change if our friends, family and/or other social groups do–in other words, if it is a “social fact”, or as Marshall says, “that’s to say that the people around, the people they know in their networks, their family, friends and community are actively seen to hold this attitude and conviction. “(interview)

“What will shift a climate change denier, not the professional ones of course but the general public, is citing the evidence that people like themselves who share their values happen to believe in it and happen to accept it.”

2. “We have parallel processes within our brains and one process deals with the analysis of data. The other deals with the emotional implications of data and the sense of threat, and that these processes work in parallel but can also be kept quite separate. When we receive our information from the scientific source, we can actively collude with those different processes by making sure that we keep it over there in our scientific part.” Note Marshall’s particular emphasis on active collusion.

The titles of three of his (very short) chapters seem to go further in developing this active collusion:

Chapter 16. Paddling in the Pool of Worry. How We Choose What to Ignore

Chapter 20. Tell Me a Story. Why Lies Can Be So Appealing

3. The victims of natural disasters forecast by climate scientists are unlikely to make the connection between the disaster and the forecast for several different reasons including “a reinforced sense of their own immunity, and an artificially reduced sense of the probability of something happening again.” Does this sound a little like the belief that lightning never strikes twice in the same place? Perhaps–and all the more tellingly because, science tells us, lightning does do exactly that.

4. People who have children are less likely than those without children to accept the truth of climate science.   Consider

Chapter 35. What Did You Do in the Great Climate War, Daddy? Why We Don’t Really Care What Our Children Think

And does all such “hard wiring” lead to denial of climate science?

If Marshall is right, then no. In fact, part of the point of his book, it seems, is to consider not just the innate/genetic qualities of our minds that lead to entrenched opposition to each but, also the opposite, those qualities that all humans have in common. These he describes as “our common psychology, our perception of risk, and our deepest instincts to defend our family and tribe.”

While “common psychology” might seem too broad a term to be very illuminating, his second two points, if true, are, presumably, grounds for some hope in an otherwise pretty hopeless situation. After all, any behaviour that is “hard wired”–as the term goes–we are told is, if not quite insuperable, something requiring huge effort and, in the terms of the inaccurate metaphor, something close to “rewiring”.

But how much is Marshall himself creating sharedknowledge or merely providing impressions and opinions?

What will immediately occur to anyone alert to the ways that knowledge is created and shared is that Marshall himself is actually applying many of the techniques of the human/social sciences to the social treatment of a natural science (or, more accurately, a series of interdependent natural sciences.)

Partly, it seems, Marshall’s evidence is second hand research, derived as he tells us in his introduction from speaking to “leading experts in psychology, economics, the perception of risk, linguistics, cultural anthropology and evolutionary psychology”.  (All these areas of knowledge have their own methodologies, of course, and their relative claims on degrees of certainty.)

Partly, in addition, the author has conducted his own research amongst “hundreds of non-experts”–that is, “ordinary” people and, in particular, victims of natural disasters. While we might appropriately ask when anecdotal evidence, however compelling, is real evidence, “hundreds” of interviews comes close to being a convincing sample size–assuming that the interview methods are rigorous and the interpretations equally sound.

More to the point, he says he has interviewed those normally associated with views most strongly resistant to climate science, including “evangelical leaders” and “Texan Tea Partiers”.   In fact, in the true spirit of critical fairness (and TOK!), he was determined to consider perspectives. As he says, “I have even enjoyed meeting the people whose life work, to which they apply great dedication and creativity, is to undermine my own life work.”

Given these claims it may be surprising that Marshall eschews many of the key methods of communicating shared knowledge: “There are no graphs, data sets, or complex statistics in this book.” Does this weaken the authority of his book? No doubt for some it will. For those who accept his accept his central arguments, though, it won’t.

And that brings us back to the great public demonstrations of Sept 21 and….

Climate Change in the TOK class

No doubt there will be many TOK teachers who want to avoid discussion of climate change. Why?

If, however, what Marshall says is true, it is the very fact that people DON’T talk about climate change that keeps so many of us inured to its truths. Remember what he says about “social facts” ?

Further, if what Marshall says is true about social facts, then a TOK discussion will perform on a small scale what may have been performed on a large by the mass demonstrations on September 21. Perhaps, just perhaps, hundreds of thousands of marchers constitute enough of a critical mass to allow some climate change deniers to feel the peer influence and develop their own acceptance.

One response to ““Don’t Even Think About It: Why Our Brains Are Wired to Ignore Climate Change””