Doing good is good for you: Ethics and the Human Sciences, TOK and CAS

(by Eileen Dombrowski.  re-post from December 16, 2013 OSC blog.  It’s so appropriate for this time of year!) Is there really anything newsworthy about the value of doing good to others?  So much has been said over so many centuries that surely current psychological research cannot add tremendously to our understanding!  And surely doing good falls within the scope of ethics — and not within the scope of the human sciences!  Yet, quite the contrary: recent studies in the human sciences do contribute knowledge — and knowledge that is particularly welcome at a time of year when in many parts of the world religious and secular traditions celebrate caring for others and giving generously.

Personally, I find the results of these studies give my heart a little lift – maybe because they confirm some things I want to believe about human beings (confirmation bias!), and some obscure sense of fairness. They indicate that doing good for others – for instance, engaging in many of the volunteer activities of CAS – can improve our own health and happiness.  Moreover, they suggest that doing good for others is contagious – that those who benefit pass on their attitudes and actions!

I find these fine conclusions for a time of year when, in my part of the world (western Canadian coast), huge social emphasis falls on giving gifts and caring about the welfare of others.  In my own community in recent weeks, innumerable people have been busily supporting undertakings from the local to the global – from gathering contributions for local food banks to organizing fundraisers for relief or development beyond our borders.  As at any other time of year, they seem to feel pretty good about helping others.

Admittedly, it’s certainly not new to say that people feel good about doing good.  What is fairly new, however, are the forms of justification provided for this familiar knowledge claim.  Recent studies illustrate the methods of the human sciences, their differences from the methods of ethics even when the subject matter appears to overlap, and the benefit to our understanding of incorporating the contributions of both these areas of knowledge.  They also point to the overlap in questions posed by TOK and CAS reflection.

As we are aware in TOK, ethics is an area of knowledge that deals with how we should think and act.  It asks, “What is the nature of goodness?” and “How do we know what the moral thing is to do?” It works through analytical thought and argument to establish and clarify concepts and, at the applied end of its spectrum, to argue for different approaches to justifying — guiding or judging — moral choices and decision-making.

The human sciences, in contrast, are an area of knowledge that deals with how we do think and act. They ask, “How do people actually behave, and how do we know this?” “What are the appropriate methodologies for studying people to answer these questions?”  They do not necessarily take on questions of moral actions at all – of generosity or kindness – but when they do so, they investigate them with methods that test for significant correlations in actual human actions and responses, and venture into suggesting causal connections.

“Goodness” and the Methods of the Human Sciences

In recent studies of the effect on people of doing good for others, methods include ones characteristics of the human science of psychology:  questionnaires and interviews with questions carefully prepared to survey a population; tests to see how people respond to specific set-up situations; and brain scans to observe what happens in the brain when people are stimulated to think of particular situations. 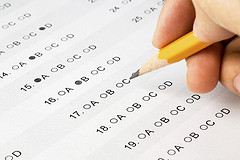 Survey results like this always raise the attendant critical questions: How can questions be designed to quantify experiences? In a study of volunteers, what is the effect of having the population self-selected?  Was there a control group, or perhaps a before-and-after study? Were the questions phrased in any way that could bias the answers?  Could respondents be inclined to affirm the positive features of their own choices?  The survey, in this case, was run by a professional polling organization experienced in surveys and interpretation of results.  (For a description of their methods, see page 14, Health and Volunteering Study)

More closely analogous to IB CAS is a different study of 106 high school students. Researchers at the University of British Columbia used both questionnaires and physical examination of heart health (inflammation, cholestrol). They found that “students who reported the greatest increase in empathetic and altruistic behaviour after their volunteering experience also exhibited the most pronounced improvements in their health.”

In a wider-reaching study of 200,000 adults in 136 countries, researchers from Simon Fraser University in Vancouver combined a variety of methods: they crunched data, asked questions, and did tests. They found a positive link between charitable donation from income (data) and subjective well-being (questionnaire).  They also randomly assigned adults to spend on themselves or on others (tests), and found that those who spent on others experienced greater happiness (questionnaire).

Although many more studies could be cited, I’ll choose just one more to illustrate the range of methods in psychology in testing any correlation between generosity and personal well-being, and the search for cause.  The technology of MRI scans of the brain allows psychologists to see in physical terms what goes on inside us as we make choices that we deem generous.  In this study,   “When participants chose to donate money, the brain’s mesolimbic system was activated, the same part of the brain that’s activated in response to monetary rewards, sex, and other positive stimuli. Choosing to donate also activated the brain’s subgenual area, the part of the brain that produces feel-good chemicals, like oxytocin, that promote social bonding.”

Oh – and let me squeeze in just one more! Generous actions from one stranger to another seem to be contagious, according to tests that trace cascades through social networks. Generosity is passed on, though with decreasing effect, over several degrees of separation.

And why am I smiling about all this?

Maybe I don’t really know why I’m smiling as I read these studies.  Maybe I need a good psychologist and some MRI brain scans to tell me.

BUT…I suppose I’m tallying one for my side – the more cheery and optimistic (most of the time) view of life, with a tendency to look for what feels like justice. (Confirmation bias again!) Generosity can be its own reward after all – in the benefits to health and happiness for those who think and act with empathy. Those in the hair-shirt school of moral theorizing, who suggest that to be truly moral an action has to be itchy, uncomfortable, and self-sacrificing, might not be chuckling.  (But it’s clearly neither generous nor empathetic of me, either, to be laughing at their hair-shirt approach to morality!)

I also started to laugh (foolishly) about economists who make the assumption that we choose out of rational self-interest rather than concern for others.  But then I realized that they were the ones who should be laughing at me! They can point out that findings of benefit to health and happiness demonstrate that it can be rationally self-interested to help others, even without expectations of reciprocity.  (I wonder if the same benefit accrues to your health if your motive in doing good is solely to improve it.)

I’m also very pleased, after decades of involvement in both TOK and CAS, to think about how they work together in encouraging students to involve themselves in questions of empathy and ethical action.

TOK deals with empathy most centrally as a convergence of ways of knowing. Emotion and imagination, and possibly intuition, are most obviously involved in being able to “feel for others”. But they are accompanied by the other ways of knowing, such as sense perception and reason leading to general observations of people and the world that help us to understand sadness, hardship, and need.  Memory and language, further, help us assimilate what others have said about the circumstances of need and the impact on human beings.

Empathy is a topic that arises in many parts of the TOK course, mostly related to questions of understanding other people – and whether “understanding” is a reliable justification for interpretations in the human sciences, history, or the arts.

Most relevant to this topic of generous action, though, is TOK’s treatment of ethics. It considers ethical perspectives that give different lines of argument on helping others – possibly based on principles, possibly based on weighing of consequences, possibly based on caring. (I won’t repeat here all I’ve given in my book. You can check chapter 16 of the Theory of Knowledge IB course companion.)

Both TOK and CAS, in their reflections, link empathy and ethical concepts with how we interact with others. Yet TOK, as ever, stands back from actual engagement in action.  What it contributes is important: skills of critical thinking to evaluate the knowledge base on which effective action rests, recognition that knowledge has implications for action, and awareness of ethical perspectives on evaluating right action.

But then it is CAS that takes over and plans volunteer work and various forms of actively helping others. It is CAS that provides the experiential knowledge and develops skills not just of acting but of acting ethically and effectively.  As teachers, we’ve long recognized the benefits for students’ education of actively helping others in the community and the world; their doing so is significant to IB educational goals.  But now we can add another benefit, with the support of psychological research: we could well be improving our students’ own health and happiness, for now and for the future.

And a final PS: some classroom support and a classroom activity

If you’ve read this far, you probably share my own interest in connecting TOK with the world – with real research going on at the moment and its implications, and with the relationship between thinking and acting.  For an emphasis on developing critical thinking toward acting well, I can refer you to my TOK IB course companion. For now, I’ll leave you with a classroom activity.

Researchers Lara Aknin and Elizabeth Dunn won an honorable mention in the Social Psychology Network’s 2013 Action Teaching Award for this activity entitled “From Wealth to Well-Being: Spending Money on Others Promotes Happiness”. I’ve not used it myself in class, but I can see its usefulness for catching student interest and launching discussion on connections between ways of knowing and ethical ideas.  It could also broaden into a discussion of the relationship between TOK and CAS.  I leave it, with all its possibilities, in your hands.

And finally, I send you all the good wishes that, in my part of the world, go with this season.  As we move deeper in deeper into darkness, I wish you, at the very least, a Happy Solstice!  In many a metaphorical way, enjoy lighting the candles.

Lisa Farino, “Do Good, Feel Good: New research shows that helping others may be the key to happiness”, MSN Healthy Living, March 7, 2010.  http://healthyliving.msn.com/diseases/depression/do-good-feel-good-1

James H. Fowler and Nicholas A. Chistakis “Cooperative behavior cascades in human social networks”, Proceedings of the National Academy of Sciences of the United States of America. March 8, 2010. http://www.pnas.org/content/early/2010/02/25/0913149107

UnitedHealth Group, Doing Good is Good for You: 2013 Health and Volunteering Study.   (Note methods of research outlined on page 14.) http://www.unitedhealthgroup.com/%7E/media/UHG/PDF/2013/UNH-Health-Volunteering-Study.ashx