Germany’s Pegida: “groping in the dark of logic”

(by Theo Dombrowski) “As a default, we humans are notoriously irrational,” writes Adam Fletcher. “Many of us suffer from something called dysrationalia which is being unable to think and behave rationally despite having adequate intelligence. Dysrationalia explains why otherwise smart people might believe in horoscopes, Yeti, the Easter Bunny, the Tooth Fairy, or Xenu, the ruler of the Galactic Confederacy.”

The failure to separate genuine knowledge from spurious claims can, of course, be dangerous. The contemporary world, in spite of increased education and awareness, is bristling with politically painful examples of widespread social problems arising from “dysrationalia”. In fact, the opening quotation is from a satiric article  focusing on the particular issue of knowledge-claims-gone-horribly-wrong — yet flourishing — in a protest group in Germany called Pegida.

Essentially Pegida is against immigration of all sorts, and especially of Muslims. Founded in October, 2014, in Dresden, it takes its name from an acronym (in German) for Patriotic Europeans Against the Islamization of the West. Attempting to avoid close (or, at least, exclusive) links with neo-Nazi groups and/or violence, the organization specializes in largely orderly public demonstrations claiming to represent “the people”. In fact, its recent 19 point “manifesto”  includes some reasonable, even moderate, points — along with many that are, well, the opposite.

There is, of course, nothing new about xenophobia–nor is it restricted to contemporary Germany. Pegida, however, makes a good example to discuss in a TOK class because it has given rise to some analytical and thoughtful analyses of issues relevant to several aspects of TOK.

1. History as an AOK: knowledge of the past

In a blogpost last June (TOK and counter-factual history) I looked at the ways in which a recent surge in the popularity of “counterfactual history” illuminates much about the nature of shared historical knowledge. In an article in The Guardian focused on Pegida and headed “Amnesia, not Immigration, is Europe’s Problem”, Natalie Nougayrède argues that the failure to remember its own history, and to base historical assertion on fact, underlies Pegida and similar groups. She turns for many of her points to historian Tony Judt who shows how, contrary to what many xenophobic groups think, Europe has had a long history as a multicultural crossroads.

It seems, indeed, that the rhetoric of groups like Pegida, brandishing the claim that European nations were formerly “pure”, or, at the very least, homogenous, is simply ignorant:

Since 1989 many of Europe’s centres have become “cosmopolitan global cities, whether they like it or not”, writes Judt. The historian’s message is that Europe’s future [like its past] is multicultural. Its core values are about being open to the Other. The only time Europeans experienced relative demographic homogeneity – that era of supposed tranquillity – was in the wake of Hitler’s and Stalin’s devastations.

Tony Judt is great to read on this. In his book Postwar, he recalls how “the European continent was once a complex tapestry of languages, religions, communities, and nations that overlapped. Many of its cities – including some of the smallest, at the intersection of old and new imperial borders, such as Trieste, Sarajevo, Salonica, Czernowitz, Odessa, Vilnius – were truly multicultural, with Catholics, Orthodox, Muslims, Jews and others mingling.”

But why, then, do many contemporary Europeans believe that, until recently, their countries were culturally homogenous? It seems that the world wars that swept across Europe are to blame:

Judt goes on: “Between 1914 and 1945, however, this Europe was reduced to ashes.” As a result of war, occupation, border changes, expulsions and genocide, most people ended up living among people like them, in different states. During the cold war, the two halves of Europe lived in “hermetic national enclaves” – a world of homogeneity, notes Judt.

It is thus a basic misunderstanding of history that lies at the root of many of the
claims of Pegida. Much of history’s value as an area of knowledge may arise–as is often pointed about–by providing us with knowledge of a past so that we are not “doomed to repeat it”. The value of history in this example, however, is otherwise: knowledge of the past can prevent false assumptions about the way the future should be managed to replicate a past–that didn’t exist.

Though treating it as a comparatively minor thread through her article, Natalie Nougayrède does identify a second fundamental aim of TOK–the crucial importance of recognizing the role played by “perspectives”.

In this case, historian Tony Judt demonstrates the role history can play for Europeans in emphasizing– and as a “core value”–being “open to the Other.” Just as TOK underlines the importance of understanding the role played by differing perspectives (of culture, gender, religion, and so on), so the (negative) example of Pegida demonstrates, through its ignorance of history, the role played by failing to understand alternate perspectives.

Although journalistic analyses of the knowledge-failures of Pegida are multiple, one particularly lively satirical (ironic? even sarcastic?) article provides a useful analysis of four more relevant problems with knowledge claims gone badly adrift.

Wherein does this “magical new world” reside? Exactly, it seems, were all magic lies. Need we say more?

With the help of Pegida™, you become immune to the effects of inconvenient facts. If anyone from the “lying press” tries to contradict your world view, your brain will automatically short-circuit like a robot vacuum cleaner covered in milk.

Thanks to Pegida™, when someone confronts you with the so called “truth”, you’ll repeat a series of standard phrases until they go away.

If Adam Fletcher is correct, then members of this group practise a kind of double-pronged method of blocking out genuine knowledge. First, without making a conscious effort, not only do group members simply ignore any knowledge that doesn’t correspond to their own beliefs, but also they build up their defences further by unthinkingly repeating (often shouting in public rallies) several standard phrases– most infamously “Lügenpresse”, literally “lying press”. (“Pegida’s favourite ‘lying press’ is ‘un-word 2014”).

Many will recognize “false cause” from informal logic (TOK Course Companion p. 128). The term refers to the familiar human problem of seizing on an apparent cause that, in fact, is merely that–apparent. In discussing reason as an way of knowing, we look at issues that arise in sifting through cause and effect analysis.

Adam Fletcher doesn’t use the term “false cause” (or the more traditional Post Hoc), but he does point out the easy confusions of cause and effect perpetrated by Pegida. In what he calls “Advanced Scapegoating”, Fletcher points the finger of blame at Pegida for creating a mere illusion of knowledge. As he playfully he puts it:

Scapegoating was an ancient tradition that involved taking a goat, projecting all of your problems, sins and disappointments upon it and then casting it out to the desert. It was a very fun and effective way to deal with your problems, because you weren’t the goat.

Still, if his analysis is correct, Pegida is, indeed, guilty of this very form of misaligning cause and effect. If a problem has arisen after immigration in time sequence, the all-purpose cause of the problem is, for Pegida members, immigration.

The thought-confusion created by “crowd mentality” has long been established (c.f. p. 290 of the TOK Course Companion and its photograph of the Nuremberg rallies).  In a post back in September, I commented on how recent cognitive research has demonstrated how the need for group identification trumps evidence-based science in, for example, climate science. (“Don’t even think about it: why our brains are wired to ignore climate change”)

In what he calls “Instant Community”, Adam Fletcher asks his hypothetical citizen, “Do you get lonely sometimes? Do you wish there were other people around who shared your opinions?”. Pegida, he ironically asserts, attracts people like that:

But with it, oh boy, you get to be part of a group of disappointed individuals who think no-one is listening to them! Much better! Many don’t know exactly what it is they’re not being listened to about, but that doesn’t mean they can’t be angry about it. Rabble! Rabble! With Pegida™ you get to be one of the Volk.

Like Natalie Nougayrède, Fletcher identifies “selective amnesia”, and then goes on to give his lively definition of “dysrationalia” quoted at the beginning of this post. Arguably, all the knowledge problems with Pegida listed here are largely kinds of dysrationalia.

Still, in the last part of his analysis, called “Heightened Irrationality”, Adam Fletcher singles out Pegida’s particular ability to fall victim to two species of irrationality–first, “to believe in even more far-fetched things” (than the Easter Bunny), and second, to accept rational contradictions. Aping a Pegida follower, he says, for example: “’The press lie about Pegida™, yet we won’t be interviewed to tell them the truth.’’’ Fletcher summarizes, “With Pegida™ you can have hours of fun groping in the dark of logic.”

Groping in the dark of logic? Suffering from dysrationalia? In this satirical article’s treatment of Pegida, its followers are presented as wandering in the murky depths of false knowledge claims. Yet it’s clear that their ignorance of history and their susceptibility to logical fallacies over cause are not exclusive to them; these are common human failures. Their response to slogans and desire to belong are likewise recognizable and understandable emotions.

Can’t we see these characteristics in ourselves? Learning to think more critically is a skill that is useful not only for evaluating others and their thinking. It’s a skill that helps us recognize the tendencies in our own minds – toward error and toward group thinking that blocks alternative perspectives. The case of Pegida, though, reinforces the vital need for those skills and points toward the implications for how we live with others in the world. 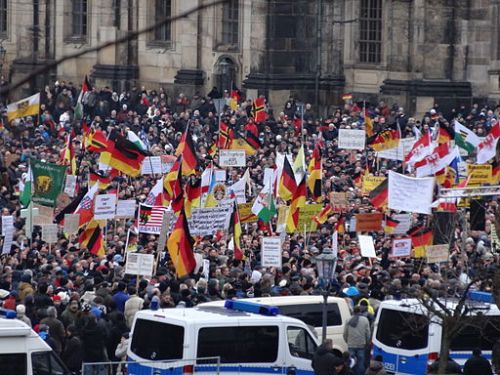 Like Loading...
This entry was posted in IB Theory of Knowledge and tagged analysis, cause, emotion, fallacies, history, implications, memory, perspectives. Bookmark the permalink.