(by Eileen Dombrowski, from OUP IB blog) “Scientific truth is a moving target,” wrote the editors of the Public Library of Science (PLoS) a decade ago. “But is it inevitable, as John Ioannidis argues…that the majority of findings are actually false?” In the decade since the editors posed this question, the psychological sciences have been shaken by further challenges to their credibility, including some widely reported controversies. It was August of this year, however, that brought the most significant shock waves, when the Reproducibility Project of the Open Science Collaboration announced its conclusions – that most of the articles published in leading psychological journals were unreliable. Most! This crisis in knowledge – in both its nature and its interpretations — is acutely relevant to us as teachers of Theory of Knowledge, aiming as we do to treat the human sciences with contemporary understanding. END_OF_DOCUMENT_TOKEN_TO_BE_REPLACED 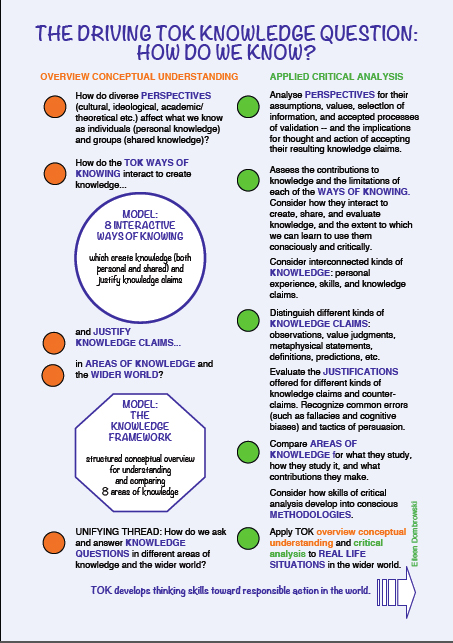 (originally posted on my OUP TOK blog) Ideas can be treated at different scales.  Anyone writing a paper or preparing to teach a course knows that – and Theory of Knowledge teachers most certainly do!  Knowledge questions zoom skyward to such broad levels of overview that they can temporarily scale everything but the strongest contours of knowledge right out of sight. Today, I’m going to risk extreme vertigo to share with you one overview of the Theory of Knowledge course itself, scaled to a single page.

END_OF_DOCUMENT_TOKEN_TO_BE_REPLACED 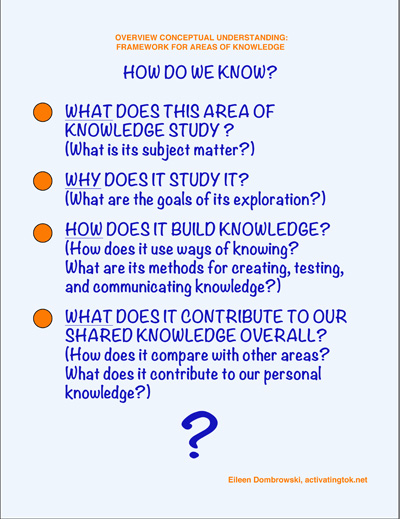 (originally posted on my OUP TOK blog) IB Theory of Knowledge soars over knowledge, dipping to see knowledge claims close-up and lifting into the sky for overviews of whole bodies of knowledge claims and the contours of different areas of study. Experienced teachers of TOK become comfortable with framing particular examples with general concepts at differing levels of generality, or grounding large concepts with particular examples, across all areas of knowledge. But do we risk leaving our students behind? What is a comfortable level of generality, and a comfortable level of language, for students as they enter discussions on areas of knowledge?

END_OF_DOCUMENT_TOKEN_TO_BE_REPLACED

“It shakes your guts.”: TOK knowing in an adventurous ice climb

(by Eileen Dombrowski, first published in my TOK blog, Oxford University Press) Ice climbing to precipitous heights is not everyone’s idea of a good time. Certainly – most certainly – not mine! But while I find adventurer Will Gadd’s ascent of frozen Niagara Falls essentially horrifying, I’m intrigued at the potential for a stimulating TOK class that emerges from the videos of his climb in January and a video/audio interview he did in June of this year. In this blog, I often suggest fresh material for TOK classes. This time, I’ll go into some detail on how I imagine using it – and please feel free to pick out anything useful to you. END_OF_DOCUMENT_TOKEN_TO_BE_REPLACED